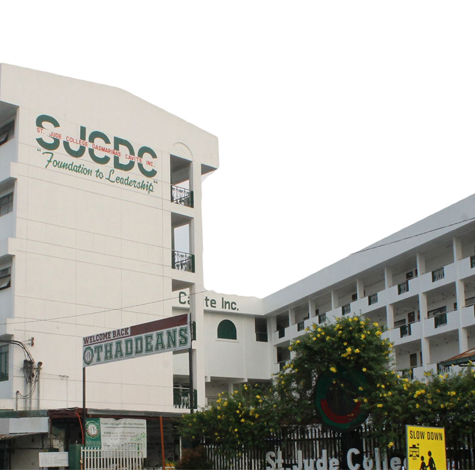 St. Jude College, a non-sectarian institution was established in honor of Saint Jude Thaddeus, the Apostles and Patron saint of the Hopeful and the embodiment of the true Christian spirit. Through its allied health services, it started as a school of Nursing and St. Jude Maternity Clinic in 1950.

Faced with the growing health needs of the community and the breakthroughs and advances in allied medical services, the founders, Dr. Ramon D. Atienza, Jr. and wife, Dr. Felicidad Calip-Atienza, expanded the Maternity Clinic from a two-storey building to a five-storey building with a 120-bed capacity. Later, they built an eight-storey building to house the growing School of Nursing. The two edifices were inaugurated on the feast day of St. Jude Thaddeus on October 28, 1968. As a result, the Maternity clinic was elevated to the status of a General Hospital. In 1975, the School of Nursing was elevated to the status of a College for consistently producing outstanding students and exemplary topnotchers in the licensure and board examinations since 1971.

Through the years, with the sheer dedication and passion of the founders, two additional buildings both eight-storey high, were erected to comprise the main building, and LA-High School Building in 1971. By then, baccalaureate courses such as BS in Secretarial Administration, BS in Commerce, BS in Business Administration, BS in Nutrition and DieTetics, BS Nursing and Bachelor of Arts Major in English, Filipino, History and Psychology were already being offered. Further, it had also offered its first graduate program in Masters in Hospital Administration and two-year associate courses in Junior Secretarial, Dietitian aide and Health Aide.

In 1985, government recognition to operate the programs was granted to the college to open the following course: Associate in Hotel and Restaurant Management, Associate in Radiologic Technology and Master of Arts in Teaching Nursing Education, courses in Midwifery, BS in Civil Engineering, BS in Industrial Engineering, Associate in Tourism and BS in Hotel and Restaurant Management. Due to the rapid expansion of academic courses, additional two-eight storey buildings were constructed in the early 90s.

With a vision for progressive, proactive and dynamic education and the mission of upholding academic and clinical excellence, courses such as BS in Physical Therapy, BS in Occupational Therapy, Associate and BS in Respiratory and BS in Computer Science were offered in 1995. Moreover, graduate programs leading to the degree of Master of Arts in Nursing and Master of Arts Major in Educational Administration were approved.

In 2001, a four-storey was added to accommodate college and graduate school students.

In 2003, the Bachelor of Science in Nursing Program was given the level 1 Applicant Status by the PACUCOA. This reflected the institution’s commitment to quality and excellence, relevance and responsiveness, access and equity, and efficiency and effectiveness to instruction, research and extension services.

In 2006, St. Jude College tied up with the University of Nevada in Las Vegas (UNLV) to offer the Master of Science in Nursing (MSN), Nurse Practitioner Pathway.

On March 6-16, 2007, a delegation composed of the academic deans and corporate secretary of the Board of Trustees visited several cities in China to benchmark, network, and establish linkages with educational institutions.

On May 12, 2007, the St. Jude College President delivered the keynote address during the Clinical Graduation of the MD-RN Family Nurse Practitioner Program (MD-RN_FNP) pathway, an innovative tie-up between SJC and UNLV Schools of Nursing in the United States of America.

On May 19, 2007, China’s Liuzhou Medical College and Tumor Hospital and St. Jude College signed a Memorandum of Understanding which marked the student and faculty exchange program.

In June 2007, the college defined its new vision, mission, core values, and strategic plans that would respond to the emerging opportunities and challenges of the 21st century.

In July 2007, St. Jude College signed a memorandum of agreement with Zhaoquing Medical College. The School of Rehabilitation Sciences revised its curriculum to become the first school in the Philippines to offer Traditional Chinese Medicine and Acupuncture Program.

St. Jude College School of International Hospitality Management became one of two colleges in the Philippines to be recognized and designated as an academic provider of the Association for Tourism in Higher Education (ATHE) of the United Kingdom.

On February 22, 2008, St. Jude College entered into a consortium agreement with the University of Rizal System (URS), authorizing the former to offer a doctorate program leading to the degree of Doctor of Philosophy, Major in Educational Management and Master in Management. The consortium proved to be successful as many graduate students have enrolled and are ready to defend their respective research works.

On April 24, 2008, the School of International Hospitality Management and School of Radiologic Technology welcomed the PACUCOA representatives for consultation visit, which served as the first phase for PACUCOA accreditation.

On June 5, 2008, St. Jude College students continued its expansion for global linkages as Otago Polytechnic School of Nursing in New Zealand opened its doors to our graduates.

On June 13, 2008, St. Jude College entered into a consortium agreement with the Angeles University Foundation (AUF) of Angeles City, Pampanga to offer a graduate program leading to the degree of Master of Public Health (MPH).

In 2010, Dr. Manny Atienza, International Director for Business Opportunities, has initiated talks with Universtity of Azuza Pacific, University of Hawaii and Charles Drew University in Los Angeles for academic linkages.

Four decades of service of the founders of St. Jude College and forty years of successful service in the context of Propter Humanitatem is a pledge that the present leadership maintains through the years. Because of this burning aspiration, a five-year Development Plan in the light of the institutional capabilities of St. Jude College was submitted by no less than the President to actualize its ultimate vision to become a university.

Gearing towards the actualization of President’s dream, the college continuously sustains his strong desire to attain quality education by making his curricula, researches and community extension services meet the international requirements with the hope of going beyond the standards and meeting her ideal-excellent education.

Keeping faith in St. Jude Thaddeus, St. Jude College intends to mark in her story the vision and mission to advocate quality education with values, i.e. guiding thaddean student to become globally professional in the service of humanity and for the glory of God.